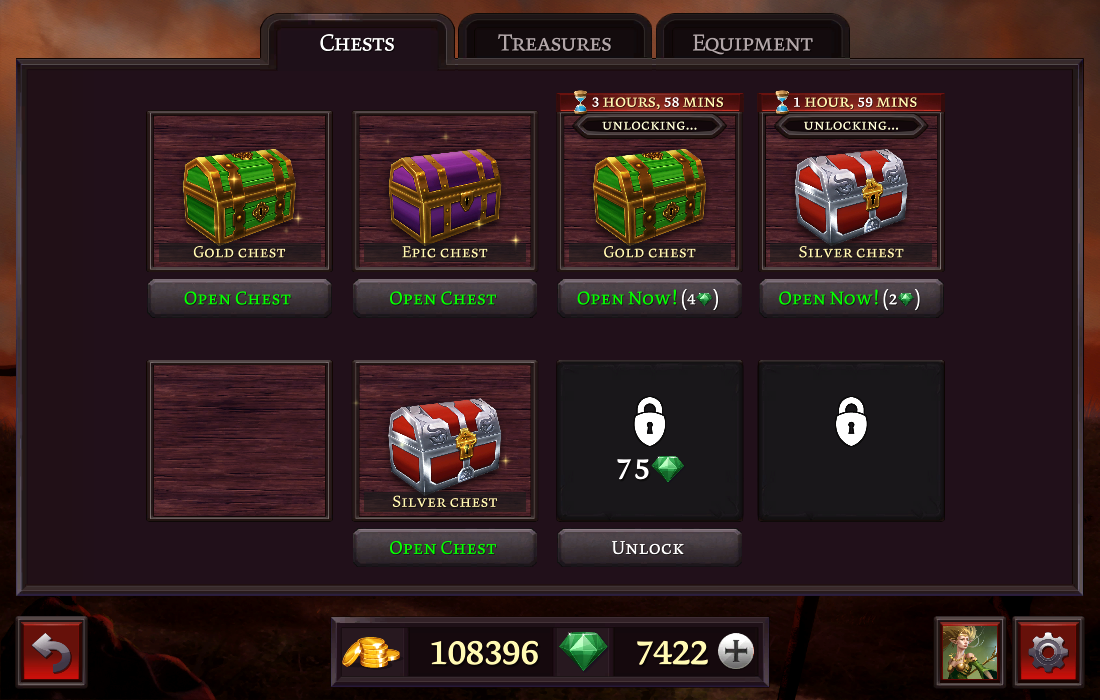 In Storm Wars, there are two basic currencies: Gold Coins, and premium currency Gems. Gold Coins are earned after every successful victory, and Gems are earned for achievements and as special prizes for regular events. More on that is below.

Gold Coins and Gems are listed in the panel at the bottom of the screen. Other valuables are stored in the Treasures subscreen, which you can find by clicking the Treasures button from the main menu. There are three tabs in the Treasures subscreen. The first is for chests (shown in the above image). You start out with 4 slots available to collect chests; many players advise that unlocking extra chest slots early is smart, to be able to grind for rewards effectively as soon as possible. The second tab is for Treasures that you find within chests, and the third is for Equipment that your Hero can use.

After every battle you win, you will receive some gold and some experience for your Hero, and about 70% of the time you will also find a chest full of treasure. The type of chest you might find will vary depending on the battle you won. Better chests contain better items, but also take a certain amount of time sitting in your inventory before they can be opened.

I. Wooden Chest contains about 100 gold coins and sometimes contains a low-level item. Can be found after any standard battle and is opened instantly when found.

II. Steel Chest contains about 300 gold coins and usually contains a low-level item. Can only be found after certain Campaigns are beaten the first time through. Also is opened instantly when found. III. Silver Chest contains about 400 gold coins and usually contains a low-level item. Can be found after any standard battle and requires a 2-hour countdown to open.

IV. Gold Chest contains about 1000 gold coins and always contains a mid-level item. Can be found after any standard battle and requires a 4-hour countdown to open.

V. Epic Chest contains anywhere from 1000 to 3000 gold coins and always contains a mid- or high-level item. Can be found a few times in Campaigns and then only after Arena battles and requires an 8-hour countdown to open.

The Treasures that chests sometimes contain also go into their own section of your Treasure vault menu. You can click the tab and browse the Treasures there. These items can be used to give special advantages, like viewing the entire deck of an opponent before having to fight or refreshing your tries in a tournament or group PvP event. Some items can be sold directly for Gems. And some can be traded in for more cards, even including cards that can't be found in Core set packs! For example, in the above image, the “Powerful Scroll” found inside a Silver Chest will give the player 1 random uncommon card from any standard set instantly when used.